Quite suddenly and without warning on February 27th, the V2 cabinet for our KBCW was constantly crowbarring (a safety function on high-voltage/high-power transmitters to prevent a tube short or other high beam current events from destroying the Inductive Output Tube) and would not hold high voltage for any amount of time putting our transmitter at half power – our other amplifier cabinet was working normally.  As soon as we went to ‘beam on’ and high voltage was applied the crowbar circuit would trip and the only fault would be a very generic and mostly unhelpful ‘crowbar fault’ – nothing else.

Immediately suspecting the thyratron in the crowbar circuit I spent a lot of time going over the checks and voltages for the tube with guidance from an engineer at E2V where they make the tubes we use in that circuit.  There didn’t appear to be any obvious shorts or damaged components, the various voltages on the tube looked good and otherwise, the thyratron appeared to be pretty healthy. 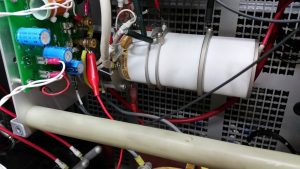 Looking elsewhere, I opened a ticket with Harris (now re-branded to “Gates AIR” as part of the unending churn in broadcast vendor ownership, consolidation and/or divestiture *sigh*) to call me back while I went spelunking in the back of the HV amplifier cabinet and spun our Director of Engineering up to get corporate paperwork processing for a replacement IOT (just in case). To localize the problem I went over the HV schematics to see if I could isolate various areas of the system and determine if the issue with the HV was inside the amplifier cabinet or the external (i.e. outside) beam supply (a.k.a. High Voltage Power Supply). 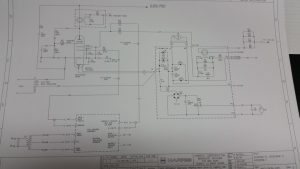 First, I disconnected the four parallel high-power resistors that feed HV from the crowbar to the tube in order to isolate the IOT (photo 1 below): still crowbarred.  This meant it wasn’t the tube creating the short which is good for the accountants as they tend to run in the $50K range.  Next, I pulled the HV wire from the crowbar cage (photo 2 below) to isolate the amp cabinet and the HVPS: no crowbar.  This meant that the HVPS could hold the high voltage and the wire from the outside cabinet and the problem was still somewhere in the cabinet in front of me.  So, I spent some time scratching my head and carefully looking over the crowbar assembly and circuit board not finding anything suspect.  On a whim, since it was a part of the circuit (but not on the schematic), I normalized the HV wiring and pulled the resistor feeding the 40KV ‘paper cap’ to eliminate it from the equation (photo 3 below): no crowbar. Then I reconnected the IOT HV resistors to supply the IOT again, but leaving out the resistor feeding the ‘paper cap’: no crowbar.  Finally, I had a likely suspect…

Although the big ‘paper cap’ tested OK with a handheld Fluke meter (which only provides a paltry 9 volts to test this 40KV cap!) and looked physically intact (I learned later that these caps tend to explode when they fail) I was lucky to find a spare waiting patiently for me in our parts cabinet so I could swap it out.  About that time Harris support returned my call and I asked the tech if I was on to something or veering off down the wrong path troubleshooting and he said that it was rare, but they do fail from time to time.  I asked him what its purpose was and he said that he believed it was a holdover for filtering used in the analog transmitters (of which earlier versions of this current Sigma model were based), but wasn’t certain.  I finished swapping it out and we had high voltage once again for V2.

Can you spot the bad cap below?  (Hint, it’s the dirty one…) 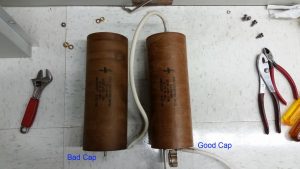 And there was much rejoicing (*yay*).

I received a lot of good info from E2V and time spent testing the thyratron, so I made a cheat sheet for future reference, so if you happen to be working around thyratrons feel free to download and use it if you believe it could come in handy. It also appears that L3 makes a direct replacement (the L-4945A) which is supposed to be a drop-in replacement for the E2V EX2708 that we normally use and I’ve included on the sheet, but I’ve not seen or tested one in service yet.